Our Identification & Profile Of The Paper Birch Tree Our Identification & Profile Of The Paper Birch Tree gearweare.net

A medium-sized deciduous tree, paper birch, along with the rest of the birch family is known for its ornamental leaves and papery white bark. This family of tree has a range of uses, from food to tools. From ornamental growth to natural growth, they are found across the globe, mostly in temperate climates. Paper birch are found across the northern United States and Canada, preferring the cold, dry areas with a good sunlight.

Birch trees range from 40 to 100 feet high when fully grown. The bark is white, forming papery layers. The layers peel off and the tree is consistently covered in several layers of the papery bark at varying stages of peeling. The youngest trees may have a maroon colored bark. As they age the bark turns white, obtaining the noticeable black scars and marks up and down the trunk.

Paper birch leaves are a deep green. They are about three inches long, and come to a pointed tip with a wide base. They vary from an oval shape to a triangular one. The tops are soft and smooth, and the bottoms show the leave’s veins. The bottoms are a brighter green, almost white in color, creating a flickering effect in the wind, which is especially beautiful in the autumn when they all turn a bright yellow.

The flowers of paper birch are catkins and grow at different seasons depending on the plant’s gender. The catkins contain the tree’s seeds, and grow about the same length as the leaves. Paper birch often leave their bark solid after they die, with the inside wood rotting away to leave a hollow shell. This is due to a very durable bark that has a high oil content. The oil acts as a water repellent, so the tree is very resistant to rain, snow, and other harsh weather. 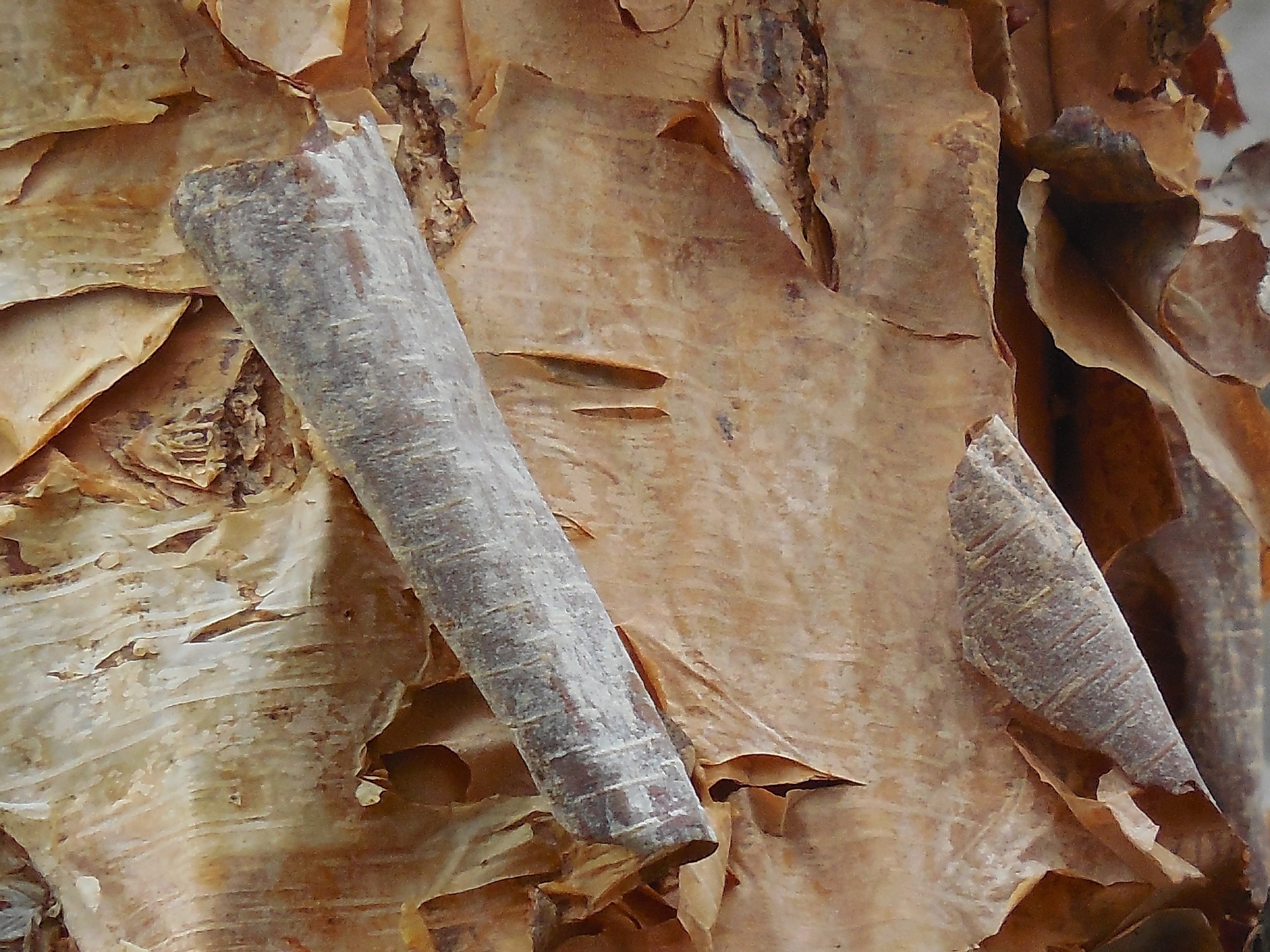 Paper birch are well distributed across the northern part of North America. Most prominently in Canada, they are found as far south as Colorado, and as temperatures increase they retreat to higher altitudes. They enjoy dry and well-drained soils, though they are found in a mixture of alternate soils as well.

The Paper birch is known as a pioneer species. It is one of the first plants to claim new open land areas. It is often seen in areas recently burned by forest fires or destroyed by other natural disasters.

Because of the bark’s high oil composition, it works well as a waterproof wood. This makes the paper birch great for a multitude of uses, especially as a tool or building wood. The Indigenous groups of Canada and the United States America often used the paper birch trees to make canoes. The thick bark was also often used to build containers. Boxes and crates are easily built with the bark, and are quite waterproof as well. They are also often used as tinder for a fire because of the light, flakey bark layers.

The gum of birch trees contains xylitol, a naturally sweet sugar alcohol. The sap also has natural sweeteners in it. Because of this, birch trees have several uses as an edible plant. The sap is drained and boiled down to create syrup, similar to maple syrup (described to have a lighter sweetness). The gum of birch trees was chewed and used as a medicine by Indigenous groups.

Because of their beautiful leaves, autumn coloration, and intriguing bark, paper birch trees are used as a decorative or ornamental tree. The trees are known to grow a bit differently when grown in groups, sometimes sprouting multiple trees from a single trunk. It isn’t just people that take advantage of this species, many animals eat paper birch leaves and bark. They are a staple autumn and winter food for moose, deer, some rabbits, porcupines, and beavers. Moose use the paper birch tree as a primary source of food in the wintertime. This is because of the sheer number of birch trees around, and the ease of which moose can find them.

Birch trees are also often used as a “reclamation species” because of their quick and abundant growth. They are used to replant many areas of deforestation. After mining, or other harmful activities on open land, paper birch trees are planted to help reforest the area. The leaves of paper birch trees turn in mid-autumn, around the same time that older tree fruits mature. The seeds fall from the trees before spring comes, and the growing process can begin again.

Harvesting the trees depends on your intended use. The wood is a great wood for burning, but must be seasoned properly. To use the wood for building purposes you must cut the entire tree down at the trunk, killing the tree. To obtain the inner bark, which is used as a soup thickener, you just need to remove the bark. Be sure to do this later in the growing season. Birches bleed a lot of sap early in the season. If you cut into them too early, it can more easily kill the tree.

Paper birch trees grow to a natural age of about 100 years. It is common for birch to be replaced by longer-lived trees after that time, like difference types of spruce trees. The birch trees are still widespread across North America, and have no special status under the U.S. or Canadian governments.

The paper birch tree is a beautiful deciduous tree. It’s remarkable leaves, bark, and coloration make it a common ornamental tree. It has a range of uses because of its bark’s oil content. Be sure to keep it in mind for the early spring each year and have a crack at making some lovely birch syrup. It is a pioneer species and grows rapidly after fires so it will be an easy tree to find when out foraging. Forests last for less than 50 years before they are replaced so check them out while they are around because they are certain to be replaced again. An Overview of This Year's Snow Predictions Oct 05, 2020
Best Guides